English version of the Charlie Hebdo editorial following the attack 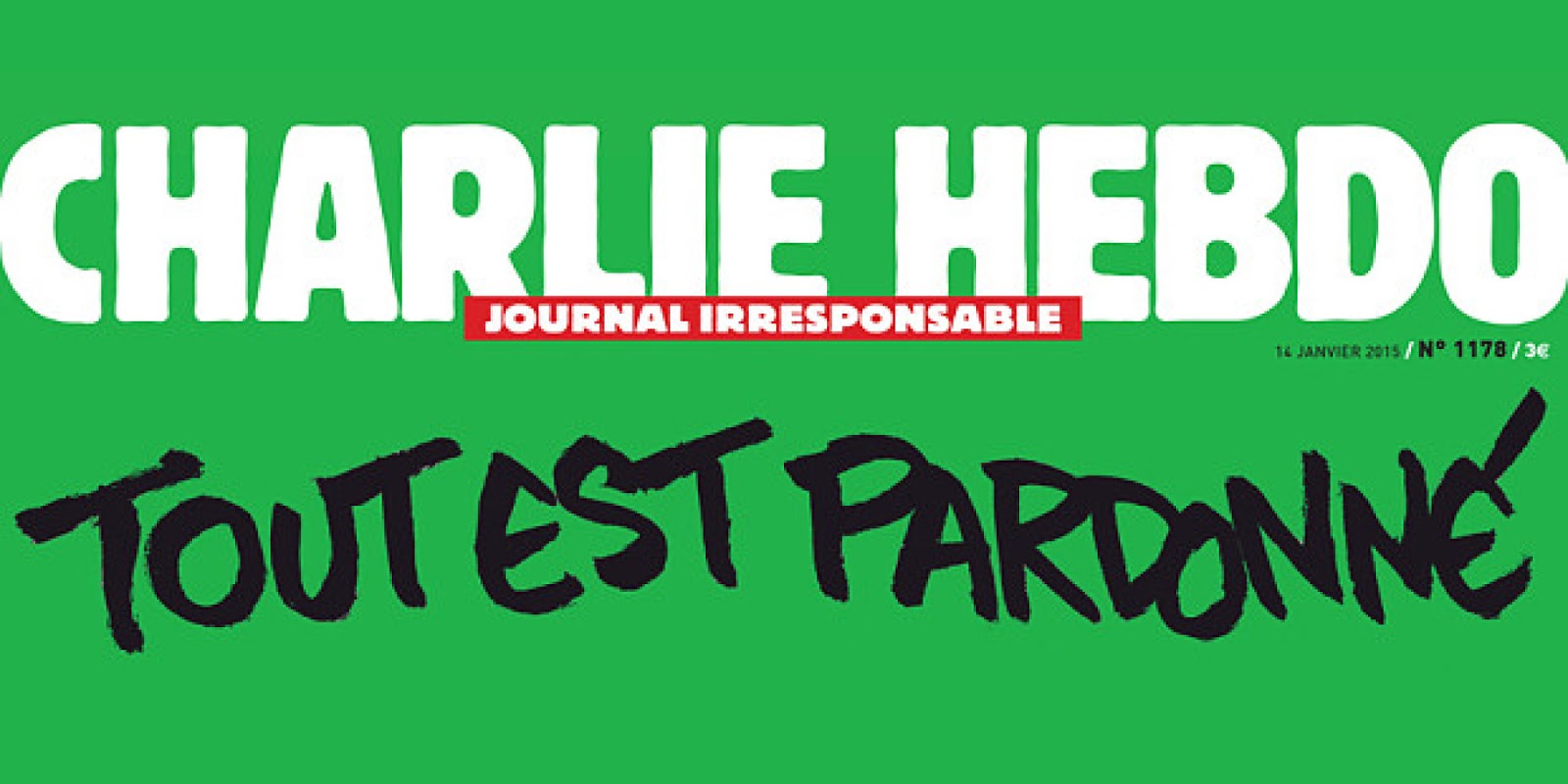 Knowing that despite the staggering seven million copies printed, not everyone would have been able to see it, French blogger Antoine Léaument has kindly shared the editorial published by Charlie Hebdo in its issue following the terror attacks last week.

With a similar aim of getting as many people as possible to read the piece, I have produced a rough and ready English translation of said editorial that you can read below.

I attended two of the gatherings that took place in London (on 07th and 11th January) to show solidarity with the victims. My pictures of the events are here and here.

You can make a donation to Charlie Hebdo here.

For the past week, Charlie, an atheist newspaper, has performed more miracles than all the saints and prophets combined. What we are most proud of is that you have in your hands the paper we have always made in the company of those who have always made it. What made us laugh the most is that the bells of Notre Dame have rung in our honor ... For the past week, Charlie worldwide has moved much more than mountains. For the past week, as Willem has so beautifully drawn it, Charlie has lots of new friends. Anonymous people and global celebrities, the humble and the well-off, the disbelievers and the clerics, the sincere and the Jesuits, some we will keep for life and some here only briefly. Today we take them all, we do not have the time or the heart to sort them out. But we are not fooled either. We thank with all our heart those, in millions, whether private citizens or embodying institutions, who are really on our side, who, sincerely and deeply, "are Charlie". They know who they are. And fuck off to the others, who, in any case, don't give a shit...
One question, though, torments us: are we finally going to get the political and intellectual vocabulary rid of the dirty words "fundamentalist secularist"? Are we finally going to stop inventing scholarly semantic convolutions to similarly qualify the murderers and their victims?
In recent years, we have felt a bit alone, trying to push back with pencil strokes the direct crap and the pseudo intellectual niceties that have been thrown in our faces, and the faces of those friends of ours who strongly defended secularism: islamophobes, christianophobes, provocaters, irresponsible people, throwers of oil on fire, racists, you-got-it-coming ... Yes, we condemn terrorism but. Yes, threatening cartoonists with death, it's not nice, but. Yes, burning down a newspaper, it's wrong, but. We've heard everything, and so have our friends. We have often tried to laugh at this, because this is what we do best. But now we would like to laugh at something else. Because it is already starting again. The blood of Cabu, Charb, Honoré, Tignous, Wolinski, Elsa Cayat Bernard Maris, Mustapha Ourrad, Michel Renaud, Franck Brinsolaro, Frédéric Boisseau, Ahmed Merabet, Clarissa Jean-Philippe, Philip Braham, Yohan Cohen, Yoav Hattab, François Michel Saada, had not yet dried that Thierry Meyssan explained to his Facebook fans that it was obviously a Judeo-Americano-Western plot. We could already hear here and there, delicate mouths pouting over the last Sunday's rally, drooling from the corner of their lips the eternal quibbles aimed at justifying, openly or quietly, terrorism and religious fascism, and getting indignant, among other things, of celebrations of the police = SS. No, in this massacre, there is no death less unjust than others. Franck, who died on the premises of Charlie, and his colleagues killed during this week's barbarism, died to defend ideas that maybe were not even theirs.
We will still going to try to be optimistic, although it's not the season. We will hope that, as of this January 7, 2015, the firm defense of secularism will be obvious to everyone, people will finally stop, as posturing, as electoral calculation or as cowardice, to legitimise or even tolerate communitarianism and cultural relativism, which open the way to one thing only: religious totalitarianism. Yes, the Israeli-Palestinian conflict is a reality, yes, international geopolitics are a succession of maneuverings and dirty tricks, yes, the social situation of, as they call them, "populations of Muslim origin" in France is deeply unfair, yes, racism and discrimination must be fought relentlessly. Fortunately, there are several tools to address these serious problems, but they are all ineffective if one is missing: secularism. Not positive secularism, not inclusive secularism, not secularism-I-don't-know-what: secularism, period. It alone allows, because it advocates the universality of rights, the exercise of equality, of liberty, of fraternity, of sorority. It alone allows full freedom of conscience, a freedom that denies, more or less openly, according to their PR positioning, all religions as soon as they leave the field of strict privacy to descend unto the political field. It alone allows, ironically, believers and non-believers, to live in peace. All those who claim to defend Muslims by accepting the religious totalitarian discourse are in fact defend the executioners. The first victims of Islamic fascism are Muslims people.
The millions of anonymous people, all the institutions, all the heads of state and government, all the political, intellectual and media personalities, all the clerics who this week proclaimed "Je suis Charlie" need to know that it means also "Je suis pour la laïcité/I am for secularism." We are convinced that for the majority of our supporters, this goes without saying. The others can fuck off.
One more thing, an important one. We would also like to send a message to Pope Francis, who "est Charlie" also, this week: we only welcome the bells of Notre Dame ringing in our honor when it is members of Femen who make them resound.

Please leave your comment here. Note that comments are moderated and only those in French or in English will be published. Thank you for taking the time to read this blog and to leave a thought.

Popular posts from this blog

October 08, 2008
Rev. Peter Mullen is the chaplain to the London Stock Exchange and the rector of St Michael's Cornhill and St Sepulchre without Newgate in the City. Rev. Peter Mullen was also until recently a blogger. Sadly the result of his cyber labour seem to have been deleted but Google has thankfully cached some of it and I have saved a copy for posterity, just in case. The deletion of Rev. Mullen's writings might just have something to do with the fact that last week, the Evening Standard and then the Daily Mail published an article (the same article actually) about some of those very writings (even though the elements of said writings being quoted had been published in June this year, at the time of the blessing ceremony which took place between two members of the Church of England in St Bartholomew the Great - picture ). In the article, we learned what the Rev. thinks about gay people and what should be done to them: We ["Religious believers"] disapprove of homosexualit
8 comments
Read more

A Short History of the Elephant and Castle and Its Name

November 09, 2010
Last night I attended a lecture by local historian Stephen Humphrey who discussed the general history of the Elephant & Castle, focussing more particularly on what he called its heyday (between 1850 and 1940). This is part of a week-long art project ( The Elephant Project ) hosted in an empty unit on the first floor of the infamous shopping centre, aiming to chart some of the changes currently happening to the area. When an historian starts talking about the Elephant and Castle, there is one subject he can not possibly avoid, even if he wanted to. Indeed my unsuspecting announcement on Facebook that I was attending such talk prompted a few people to ask the dreaded question: Where does the name of the area come from, for realz? Panoramic view of the Elephant and Castle around 1960/61. Those of us less badly informed than the rest have long discarded the theory that the name comes from the linguistic deformation of "Infanta de Castille", a name which would have become at
19 comments
Read more

November 19, 2021
Tick, Tick... BOOM! (by and on Netflix), titled after one of its hero's musicals, is the film directorial debut of Lin-Manuel Miranda, the acclaimed creator of Hamilton . Perhaps appropriately, it is about musical theatre and, itself, turns into a musical; covering the few days, in early 1990, leading to star-crossed composer Jonathan Larson's 30 birthday.  At that time, Larson, who went on to write Rent , was in the throes of completing his first musical, on which he had been working for eight years, before a crucial showcase in front major players in the industry. With social puritanism and the AIDS epidemic as background – with close friends getting infected, or sick; some of them dying, Larson, a straight man, struggles to write a final key song for his show, while confronting existential questions about creativity, his life choices, and his priorities. The film features numerous examples of Larson's work meshed into the narrative of those few days. Some are part o
Post a Comment
Read more